I miss nursing my baby.

*Feel free to skip this super long post about my breastfeeding .


My first two children, I chose to and was able to nurse for about 14 months each. I enjoyed it. It was a blessing. It came very easily to me and I had few problems. The engorgement with my first baby was very painful. I mean nothing could have prepared me for it. Luckily I had my mom there heating wet towels in the microwave for me and laying them across my chest. It only lasted a few days though and after that I had a wonderful experience with nursing ( okay, I also had one bout of mastitis which was no fun either). It was so handy and convenient and I was not one to be ashamed of nursing in public. That being the case I waited too long to introduce a bottle and never pushed the issue and then did feel a little tied down by nursing because none of my first three children ever took to a bottle. Since there was no neccesity for them to take one, I figured it was only months of their lives and mine and we weren't missing much by not having any bottles in the picture. It was especially handy when I never had to wean them from a bottle. They went straight from the breast to sippy cups. They never took pacifiers either, so it was one less thing to worry about as far as I was concerned.

With Henry (my third) I got pregnant when he was only 5 months old (woops). I sensed that my milk supply was low and tried a little harder to get him to supplement with bottles with no luck. When he was about 7 months old we had a check up and discovered that he hadn't gained any weight for a couple of months. We also found out that he had several allergies and was probably not absorbing the nutrients from my milk because I was eating all the things he was allergic to. At that time my mom kindly allowed me to go with Trent to Seattle for a weekend so that she could get Henry on a bottle. Even with me gone for 2 nights he never took to a bottle. My mom was giving him solids and sips of soy formula from a cup since he would have nothing to do with a bottle nipple. I came home and started trying soft top sippy cups (the nuby's). He finally realized that I wasn't offering him the breast anymore and took to the soy formula, but never would do a bottle. But I was still glad that I had gotten 7 good months of breastfeeding with him.


This time around with my little Paisley has been so different. I was able to breastfeed several times after she was first born. But after a few hours she had to be moved into the "special care" nursery. They would bring her in my room to feed, but I was still released a couple of days before her. I would drive back to the hospital for most of her feedings, but with 3 other kids I decided to stay home during the night and just leave my milk for her. So Paisley was able to drink from a bottle very early. Although she clearly preferred nursing, as did I. The nurses told me that when they would pull out the bottle, they could tell she was a nurser because she would root around on the bottle with her mouth all wide and she didn't like latching on to the small nipples. So when we got her home I didn't bottle feed her for weeks. But then I started having problems with bleeding nipples and all of that. I was pumping to let my nipples heal and feeding her my milk in bottles. I noticed my milk was not filling her up. I started supplementing. My nipples were feeling somewhat relieved and tried nursing again. It was never the same. I didn't have enough milk anymore. I tried herbal supplements to boost my supply. Paisley had an allergic reaction, getting red and blotchy. I tried pumping in between feedings. Nothing worked, my body was done. I had gotten about 3 months of nursing in, I had to accept that was all. It was hard. It is still hard. I hate reading the bold words on the formula cans Breastmilk is best for babies. I know that. It's best for me too. But it's just not happening anymore. I hate that I can't give her any more of what I used to call "comfort sucks" when she is upset. Sometimes I want so badly just to pull her to me and feed her the way I used to. But I can't. I am sure I miss it more than she does. I always thought it was so divine( I use that word because I think we are so perfectly designed by our Creator) that I could continue to provide for my baby everything she could ever need for 6 full months after she left the womb. I know it isn't for everyone, but I've always loved it. I will enjoy the fact that I can go out occasionally and let Trent put the baby to bed. I will enjoy the fact that I can feed my baby without leaving sacrament meeting. I know that my baby and I will be just as bonded as any other mother is to her breastfed child, but all the same I will miss it. 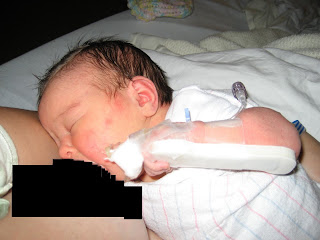 That is a really sweet post. I really enjoy breastfeeding as well.

you are a great mom, robin. i'm so glad you were able to breastfeed your babies as much as you did.

your blog is looking so cute these days, by the way.

So, weird as I am . . .and similar as I am in being a mom to 4 of the same ages . . .I read your entry about breastfeeding. It caused a span of emotions, getting teary eyed . .thinking about how neat being a mom and being able to sustain them entirely on breastmilk for so long is and then laughing out loud at your picture . .love the censor job. They grow up so quickly =(. Lexi turns 6 months next week and I'm not even ready to start solids, but will cause I should. Anyway, you've done so great nursing for so long and I'm glad you can see the good and bad that comes with having to switch to formula. I'm going to call you one of these days to catch up. Miss you!

This was a sweet and sad post and I loved it. Elora will be 11 months old next week. She takes three sippy cups of milk a day and two breast feedings. Twice this week feeding on one side at night wasn't enough for the first time. I think I might be running out of milk. I am relieved and sad. I'm excited to be done with breastfeeding and heartbroken at the same time.

I am proud of you for putting this into writing. It's been eating you for a long time. You are a wonderful mother to have tried so diligently with Paisley. I admire you so much.

Hey I can relate. You are so sweet. I was only able to nurse my Izacc for 4 months. I never really had a huge supply and tried everything I could to build it up, but it did no good. Then I went back to work and tried pumping, but I was getting next to nothing. So I was glad to see your post. You have done amazing and I think you're great!

I just wanted you to know I know the feeling! I was never able to nurse for very long- my first 3 babies got the "failure to thrive" diagnosis at some point when we discovered they hadn't been gaining weight, and in some cases actually losing weight when I was nursing full time and it was devastating. With Charlie things went great for about 2 months, with him taking an occasional bottle with no problem but eventually, he got hungry and tired of the time it took to nurse and just started looking for the bottle after about 5 minutes on each side and things just dried up. It is sad- even when you know they are just fine on formula! Every time I think there must be something I can do differently "next time" to make it work better but it just doesn't happen for me.

I never breastfed, but this post still made me sad. :(