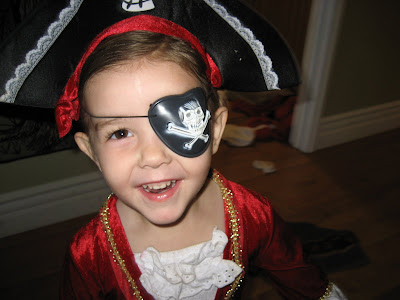 Thursday Charlotte wanted to wear her last year's pirate costume, now that we had aquired an eye patch, for her preschool party. After we picked her up we headed out to the dollar store to find Tucker a sword for his ninja costume. No luck at the first one. We had to have lunch next, so we found a Subway. The kids behaved and ate so well, I was so pleased. They were so darling crossing the parking lot with me. We made a train and chanted "chugga chugga choo choo!" We found another dollar store and scored with a 5 dollar ninja set for Tucker, then I let Charlotte and Hanky each choose a dollar item as well. We went to pay and I realized that they only accepted Visa cards, which unfortunately I do not have. I was unwilling to go look somewhere else and hoped I could find some cash in the car. I found a jar full of change and one dollar bill. I paid my $7.56 from it shamelessly.
That night Tucker's school had their Fall Fest, which was pretty fun. Paisley thought she was in heaven just running back and forth once we finally released her from the stroller, it was hilarious. 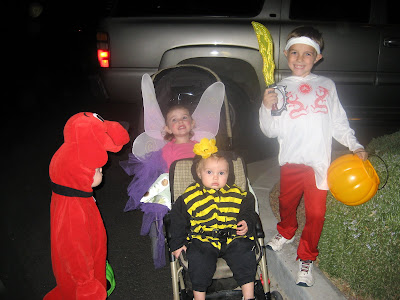 Friday was the ward Trunk or Treat which I am convinced is the best way to get candy. It's so nice to condense the walking when you usually end up holding small people. They also had a spook alley and chili cook off with corn bread and root beer. Surprisingly my chilli took the blue ribbon! I dressed as a witch complete with purple striped tights, but didn't get any pictures. That night Charlotte was a fairy princess. 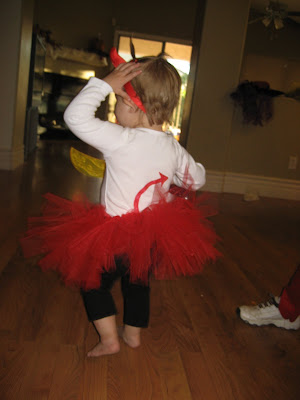 Saturday we did our annual Halloween hay ride (pulled around the neighborhood by Bart's ranger) with Trent's brother and the other local P's. Dusti's chili was even more delicious than mine! Henry was having a ball! He followed Charlotte's lead as she ran squealing to each door and was so excited to ride on the ranger with Uncle Troy between houses. Everyone loved his Clifford costume and it was really cute when he would bark instead of saying trick or treat. He always remembered to say thank you and wave goodbye to each person. What a doll. Our girls were little devils that night. Unfortunately the paint seeped on the front of Paisley's onesie and I didn't make the tail long enough in the back. But I pretty much didn't care. I didn't dress up that night, but I did get asked if I was supposed to be Sarah Palin? 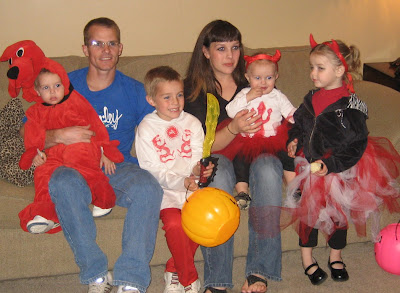 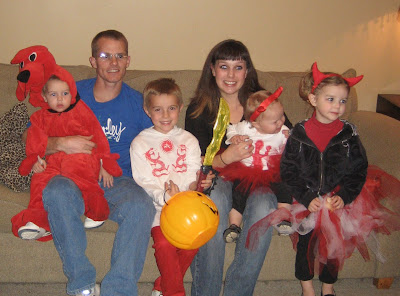 The pictures aren't great, but it's hard to worry about that when your hands are usually busy and your kids are always on the move.
Posted by Robin at 3:25 PM

Charlotte got three costumes? Lucky girl. Your devil-girls are THE cutest! Jonah loved trick-or-treating too.

You are looking so good!

Well I guess if you were wearing your glasses, then the Sarah comment would maybe apply only because it was Halloween.

I would have loved to have seen a photo of your sexy witch get-up. You are looking hot these days!

such a cute family! and I love that you paid for your meal with change!!! I do that too, and have no shame!