It's The French Revolution!

Abbie was born on July 14, 1981-twenty-two days after me. We've been hanging out pretty much ever since. 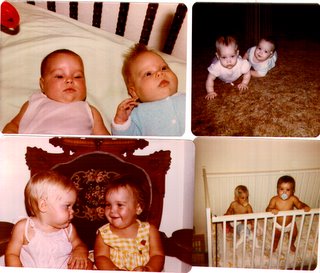 We lived in the same area until we were almost eight. 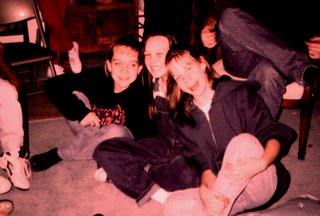 We saw eachother on holidays, and once I even flew down to go to Rocky Point with her for spring break. That trip was a disaster and is a whole nother story entirely!
I moved back in town my sophomore year, and wouldn't you know it, we ended up at the same high school. 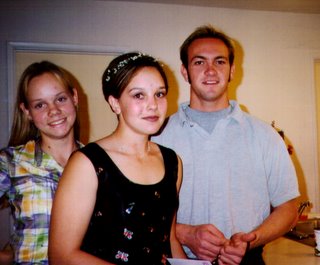 This is our strange high school love triangle. We managed to get over it. 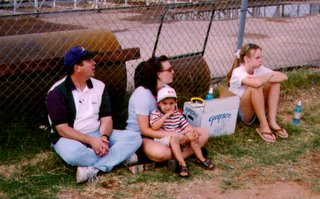 Abbie is one of my biggest supporters. She came to so many track meets. And believe me, it's not always the most exciting or fun place to be, especially in Arizona heat. Abbie and I weren't always your typical, bubbly high school girls who wished those days would never end. We had a great time writing notes using pictures and making fun of other girls. We spent time hitting thrift stores and watching our friends "jam" at Dustin's house and going to their shows on the weekends. Abbie invented Thursday holidays and saved us from the monotony of the high school week.
I will have to have Abbie do a post on Thursday holidays, as I have a notoriously bad memory and she has an excellent one. 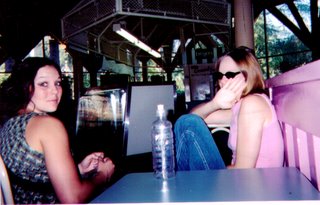 The summer after graduation we took a road trip with Meadow to Majic Mountain in California. This picture was taken about 5 minutes after Abbie threw up.
Abbie and I lived in Provo at the same time for a while. She was going to BYU and so was my husband. So we got to hang out a little there. Well our paths have crossed again for this summer and I am so grateful! Abbie is hilarious, she has a unique sense of humor. She is thoughtful. She is the cutest pregnant chick too. She is meek and underrated and usually mistaken for a teenager still. She isn't very affectionate, except with Jake. She is creative. She is a mystery.
HAPPY BIRTHDAY ABBIE! I LOVE YOU! (am I allowed to tell you that?)

Such great photos! What an awesome friend from birth!

That love triange was weird. Bryce must have felt really awkward when you and I hooked up and went to prom together.

p.s. thanks for putting those jr high / high school pictures up on the internet. I had sucessfully removed those images from my memory.

You went to prom with Robin? Awesome. Robin's right, you are the cutest pregnant teenager ever. I love you too. Happy Birthday.

HAPPY BIRTHDAY Abbie! I don't know you, but I read your blog- does that count??
Robin- I miss you.

I think I caught my ugly jr high mug in there somewhere too. I'll get over it I guess. I love Abbie too. Happy B-day!!!!!

Hey what a great site keep up the work its excellent.
»