We started our trip on Tuesday the 4th of July. We woke up around 5 am and loaded the truck and kids and headed to Trent's parents' house where we met up with the rest of the clan and hooked on a trailer with Trent's brother Bart's newest toy-a Ranger. We headed to Flagstaff after fueling up and loading coolers with ice and eating a Jack in the Box breakfast. In Flagstaff we all stopped at Trent's sister Kim's house. While stopped there Charlotte played on the grass, she has started getting onto her hands and knees and rocking back and forth when she is placed on her belly. It is so cute, she is so anxious to get crawling and playing like a big girl! And even more exciting, while we were at Kim's Charlotte had pulled my finger in her mouth and I thought I felt something little and sharp, I rubbed her gums and sure enough she had cut her first tooth!! I got all excited and handed her to Trent to feel it. He said, no, that's just a rough gum. I was so disappointed, how could I have mistaken it, but after further examination (more fingers in Charlotte's mouth) we found it definitely was a tiny little tooth! What a big girl. She had been very fussy the last week and I am sure now it was the teething. After a little playing at Kim's we headed to the Cinders about 45 minutes from there, this is where we played on quads and the ranger on all the cinder hills. 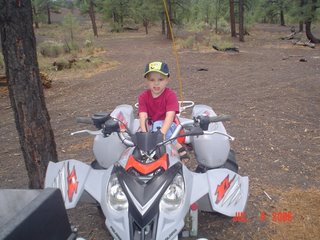 Last year Tucker was deathly afraid of quads and would scream if you even attempted to sit him on one that wasn't running. This year Tucker could not get enough rides. He had a fabulous time riding quads and the ranger and playing in the black dirt with his cousins. I stayed at the trailer with the baby a lot, but I did get to go on some fun rides and my favorite part was when Trent and Blake got out there rifles to go shoot some skeet, I went with them. I haven't done much shooting in my time, I can't remember when or where I have, but I have once before. Anyway for me they put a skeet upright on a stump which I hit on my second shot and then I shot a pinecone. After that they let me shoot at skeet flying throught the air, and to my surprise I actually hit one of the four I shot at. Not too bad for a first timer. I really liked it.
Anyway the plan was to camp there that night. Kim and Dan were going to head home to finish packing their trailer for Lake Powell and Trent's mom was going with them to stay there that night too. When Trent suggested he and Tucker stay and camp and I take Charlotte back to Kim's for the night I gladly accepted the offer. It was a fun day but I did miss the festivities of the Fourth of July. I was a little bummed not to see any parade or fireworks. The next day we headed to Lake Powell and first stopped at our hotel a little after 12:30 pm to check in and drop off our bags. Then we headed to Lone Rock beach where we always stay and set up camp for the rest of the week. A big wind storm came through blowing sand everywhere, but luckily didn't last too long. We didn't go out on the boat that day but enjoyed playing on the sand with the cousins and eating and hanging together. 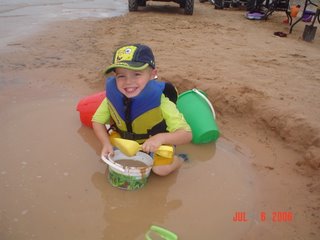 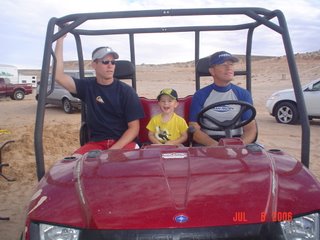 This is the Ranger. It can climb and move like a quad, but is much more stable and can hold much more weight.
The next day we were joined by even more fun relatives. Trent's sister Stacey came with her family including her 7 week old twin boys. 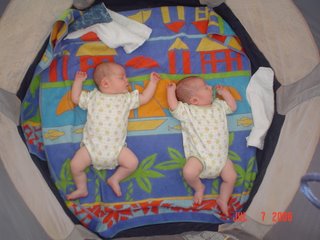 Also Trent's Aunt Sandy came with her daughter Britney and her husband a 2 year old little girl. And they brought Grandma and Grandpa Summers too. This is the annual Powell reunion. We do it ever 2nd weekend in July. I always know I can at least count on that for vacation. 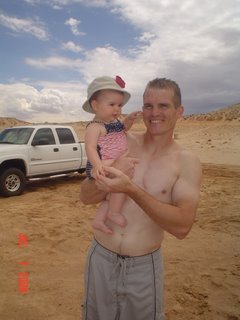 Friday morning we took family pictures at the lake. Wes (Trent's dad) has them so I'll post some later. Charlotte hated her lifejacket and would scream until the boat got going and then would instantly fall asleep. Tucker loved building sand castles, jumping on the water trampoline and going down the slide attached to it, riding the boat, riding the quads, visiting the marina where we would get ice cream and watch the huge carp that swim close to the surface waiting for people to feed them and the ducks. 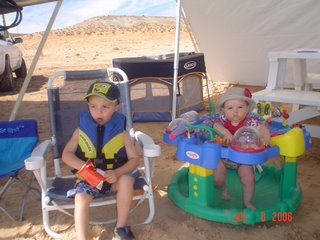 Here is Charlotte and her tongue again. We brought her saucer to sit in, and a baby pool, and an outdoor playpen. Babies require so much gear, and it was worth bringing it so I didn't have to have her squirming to get out of my arms at all times. 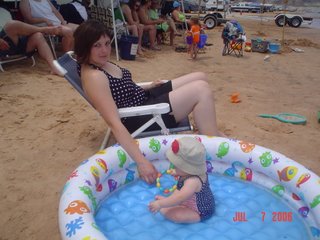 Friday night a storm blew in and we left the lake a little earlier than usual. We headed to a burger and shake drive thru on the way back to the hotel and before Tucker could even eat his dinner he was passed out. I figured he would wake up in an hour or so and eat and bathe before bed. Nope. He slept from 5:45 pm to 6:40 am! He hardly budged when I slipped him into his jammies. Saturday I finally got to wakeboard a little. It has been two years since I have gotten on a board. It was pretty fun even though the water was rough and I face planted twice. I am so sore now, I am sure sitting in a car for about 6 hours didn't help. 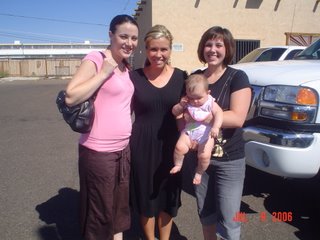 Sunday morning we checked out and went to breakfast together before heading home. This is me and my sisters-in-law Andrea and Dusti after breakfast. We had a great time!
Posted by Robin at 7:51 AM

You and Charlotte have the cutest swimming suits! Loved all the pictures of Tucker enjoying his vacation and the mad-looking Charlotte in her walker-thingy.

I'm jealous!!! Sounds like a lot of fun. Love your hair.

Charlotte looks so cute with the messy funny face in her saucer! Cracks me up! Tucker is getting so big! It will be like seeing a different family when we see you in Sept. I didn't recognize you in the photos cuz I forgot your cut your hair! Der!

what a cute family...looks like you had a great time.

I love your website. It has a lot of great pictures and is very informative.
»