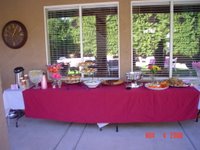 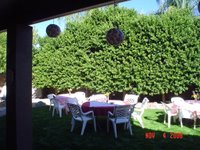 Saturday was Andrea's(sister in law) baby shower. Dusti(another sis in law) and I threw it at Terrie's(my mother-in-law) house. Although I must say that Dusti did all the hard work and almost all of the food, centerpieces, prizes, etc.. I mostly took care of bringing pink tablecloths, and a few paper lanterns, making punch and wassail(spiced cider), a couple of games, and helping set up and clean up. I thought it turned out beautiful and went really well. 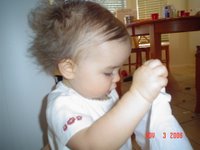 Trent had the kids from 8 am until almost 2pm! I had to miss Tucker's soccer game. I was a little bummed because I didn't want to miss any games, but figured it wouldn't be too huge of a deal. Turns out I was wrong. Tucker is usually just standing around in the field and once in a while will run back and forth or get to do a kick off. Not this game. Oh no. This is the game he decides to get the hang of it and go for the gusto! TWO GOALS! That's right folks, not one, two goals. Count 'em.
I cried when Trent told me. I missed it! Well, I can only hope it will happen again when I am there. He has 3 or 4 more games, and you better believe I won't miss another one. There are of course no pictures of that game, as I had the camera. No video, as Trent had a baby on his shoulders and no help. 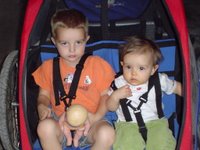 It was pretty priceless to hear the kid tell me. "I made two scores!"
What a cool kid. There is only one other kid on his team that ever scores, so it is pretty good when a 3 year old catches on enough to actually score.

Other stuff: We've been taking the kids out behind the bike.
Tucker and his cyclops fish drawing. 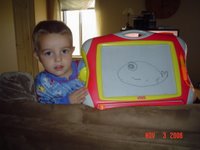 Don't feel bad about missing the 2 goals. That's how it always is. Tristan and Alec seem to have their best games when I'm not there... Bummer.
Love the cyclops!

Hey, that fish isn't a cyclops, it's just a sideview! Congrats to Tucker on good playing and drawing. That sideview of Charlotte looks like Claire and from the front she looks a lot like you. Good job on the baby shower. I hope somebody throws me one that nice (one at all, actually).

You kids are super cute...I think it is so cute that Tucker plays soccer

GREAT Post! The baby shower turned out beautifully! What a lovely yard she has!

Cute photos of Charlotte and Tucker! Great fish! Man that kid is talented... takes after his folks!