Some cute, not too excitng stuff 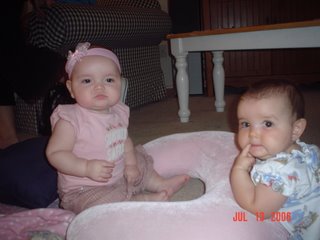 Thursday we (Charlotte and I) went to a Pampered Chef party at Diana's house. Tucker played at Grandma's while we went since Trent was at real estate school. It was nice to get out and fun to see baby Ava, she is darling and chunky, just like my little girl, and she had the cutest short pants on. Anyway I did manage to get a picture of the two of them. 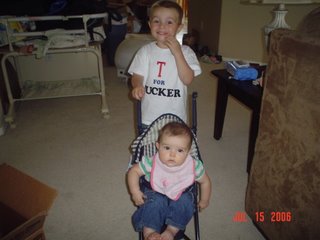 Friday night Trent didn't work late, but he was so tired from all his classes and work that he didn't want to go out or hang out with anyone. That's alright, we ordered pizza and wings( I haven't had good wings since we moved to Utah). We also rented Prime with Uma Thurman and Meryl Streep. It was alright, but long and ended pretty lamely. I like movies that are more of an escape from reality.
Saturday Tucker was pushing his doll stroller when Trent decided to put Charlotte in it. It was pretty cute. Notice Tucker's shirt. Gina made it for him and gave it to him before we moved when they had a little birthday party for us. 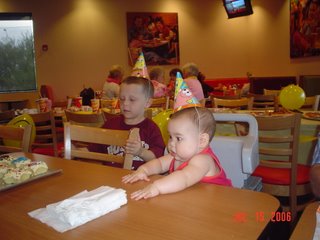 Saturday night we went to Peter Piper Pizza (like a Chuck E Cheese) for our nephew Ethan's party. It was a good time with my family who are usually pretty big slackers on planning things to do together. Moqui and Charlotte looked especially cute in their SpongeBob party hats. 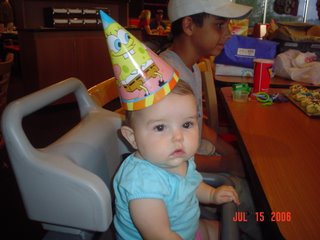 i know charlotte looks a bit like tucker, but i think she TOTALLY looks like you robin!

Charlotte is growing up... she looks soooo different! Her hair is lightening.

Love the pic with the shirt! Tucker looks so cute in it! Thanks for posting that! Can't wait to see you all!

I'm with Ruth- I totally see you in Charlotte. I thought this was a rather exciting post, Robin.

Nice! Where you get this guestbook? I want the same script.. Awesome content. thankyou.
»