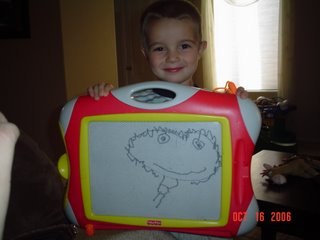 Tucker says this is him as a baby.


I was so busy trying to figure out 100 things about me I haven't been writing what I've been doing. Well Saturday started out with Tucker's soccer game. It was a rainy morning and stopped just long enough for the game to play, stopping right before the game and starting again immediately after.
Tucker was the kid standing in the middle of the field with his hand in his pants and no clue where the ball was. While I am sure it was a nice spectacle for the folks around us, it was pretty frustrating. I think I only made things worse by shouting and yelling trying to get him to go to the vicinity of the ball. One more distraction. Trent's parents came and enjoyed the sight. Hopefully the coach will do scrimages at practice. Tucker does fine when he has his own ball and is practicing kicking goals, but when there is a crowd of kids and only one ball he just figures, why go over there, someone else has the ball. 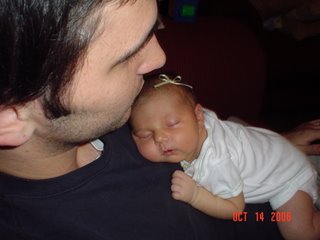 So after Tucker's game, Charlotte and I headed down to Tucson to see Abbie and her beautiful new baby. It was really fun to see them. Abbie's mom Susan was there too which was fun. Charlotte refused to nap in another baby''s crib, so she was mad and wouldn't let me set her down for about the last hour or so. Yay. I made dinner with her strapped to me in the Baby Bjorn. Then we headed home. Charlotte slept the whole 2 hours.
Monday, Jill called. Yay something to do! We got together and took the kids with us to Souper Salad. Tucker and Charlotte enjoyed cantaloupe, honey dew, cottage cheese, and breadsticks. I stuffed myself with salad and breadsticks. We rented Click on the way home and the kids fell asleep in their carseats. What a nice afternoon!
Tuesday I fugured I would be inside cleaning mostly when Lindy called. Would we like to meet her at the mall, yes we would. The kids played at the play place until they were ready for lunch. After eating they went on the carousel. Tucker enjoyed it. Then we got Charlotte some cute pants and a shirt at the Children's Place, all for 5 bucks! Headed home and once again the kids concked out in the car. Unfortunately with these car naps Tucker doesn't go back to sleep once we get home. Thank goodness Charlotte does. Trent came home with a little pop up goal and we all went to the park for a little practice. 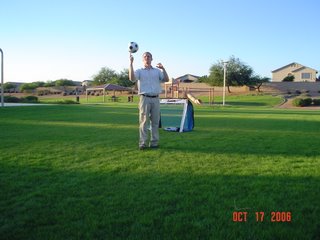 I wonder what today will hold. 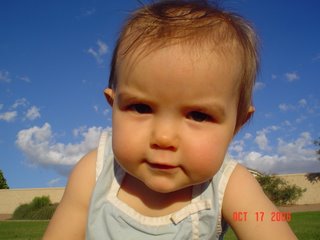 TOtally jealous that you have so many people to see and hang with. :(

That is such an adorable picture of Charlotte. I love the bright blue sky in the background.

What a tiny baby! You've been busy!!!

Did you like Click? It made me sad... I still have a bad taste in my mouth just thinking about it. It wasn't bad, just sad...