5. As long as I can remember we have gone on family vacations to for spring breaks.

6. I have always enjoyed drawing.

7. I grew up not knowing my mother’s family.

8. I have two cousins born the same summer as me. Abbie

and Jill. I love them.

9. I have always loved food.

10. I was baptized into The Church of Jesus Christ of Latter Day Saints at the age of 8 (the age of accountability).

12. In I met my lifelong friend, Amelia.

14. My 6th grade teacher Mr. Gunn was my favorite.

15. I became an aunt for the first time when I was 13. Gabe is my oldest nephew.

18. In I got in trouble with the police. Twice. No arrest, but a little community service was involved.

19. In I met another lifelong friend, Candace.

20. I also learned how to lift weights and pole-vault while in . It was the first year girls were allowed to do that sport.

21. Freshman year I broke a bone for the first time. 2 bones actually. In my left foot. Pole-vaulting, 2 days before the State meet. Ouch!

23. I continued to pole-vault at my new high school. It was the first year allowed women’s pole-vault. I placed the top 5 at State all 3 years.

24. Although I am not one of those people who thinks high school was as good as life gets, I had a lot of fun and dated a lot.

28. I learned to wakeboard and liked that too.

29. I loved music and going to shows.

30. My first concert was Silverchair.

32. I went to The Edge radio station’s big concert.

33. I watched local bands and my friends’ bands all the time.

37. I was offered a small partial scholarship by 2 local community colleges to come pole-vault. I ended up going to MCC, because the coach there helped me get a Presidential scholarship too. That is when you place in an honors class and a high enough math level with your placement tests and keep a 3.25 GPA or higher each 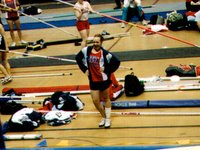 38. I was the first female vaulter at MCC.

39. After 1 year at MCC I moved out of my parent’s house into an apartment with 3 strangers. Girls.

41. We were set up by friends. It was a blind date for him, because we had technically met at pole-vaulting camp when I was 16, which he doesn’t have any memory of. I also knew who he and his brother Blake were, as I had watched them pole-vault at many high school track meets.

42. We had our first kiss the day before Thanksgiving (technically it was the morning of Thanksgiving) after our third date. It was really nice.

45. We went to Cabo san Lucas on our honeymoon.

46. We went parasailing and 4 wheeling there.

47. On September 11, after the horrific terrorist attacks, I spent the day training to sell frozen steaks door to door. I quit the next day.

48. After almost 1 year of marriage, accepted an athletic scholarship to BYU. We spent our anniversary unpacking boxes in our new rental house.

49. I was pretty glad Abbie was in at the time. I spent the first little while searching for jobs and reading Harry Potter books 1-4.

50. At the end of November, after just one month of being off birth control, we found out we were pregnant!

I am looking forward to the next 50! Great job! You are so fortunate to have such close-knit cousins. I never had that.

I like your list!! Fun to learn things about you. It's my 100th post today too. I couldn't think of 100 things, so I think I shall split it into 50 like you. You gave me good ideas. Miss ya!

You are SUCH a pretty girl! Love all the photos!

I need to hear the story that got you community service hours in WY!