Stephanie tagged me for this meme. I feel so cool. I got tagged. Thanks.

What did you name your kids and why?

When Trent and I were married, but not yet pregnant we had discussed naming our first boy Jackson Wesley. We liked it a lot. Soon after that my oldest sister got pregnant and told me that they both really liked the name Jackson and it was one of the only names they agreed on. I was happy. We weren't even pregnant so it didn't bother me that they used that name, he is such a cute little Jack. The day before my nephew Jackson was born we found out we were pregnant. Trent didn't want to discuss names until we knew the sex of our baby. Turns out we were having a boy. I started making lists of names I liked. He started crossing out the majority of the names I liked. My little sister Karen had mentioned a long time before to me that she wanted to have a son named Tucker. I was really starting to like that name, and what do you know Trent 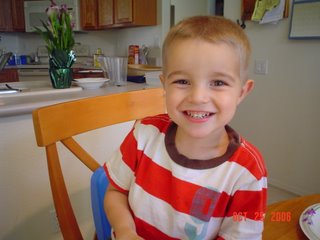 liked it too, and it was one of the only names that we agreed on. It sounded masculine and simple, easy to spell and pronounce. Nothing made up. We wanted to wait until he was born to make it official so we kept Chase as a back-up name. However, I didn't really want to name my baby Chase, I wanted to name him Tucker. Trent thought that Tucker Trent sounded good together and when he came out, we thought, "There he is, our Tucker Trent."During my pregnancy I got a lot of mixed reviews about the name, but I am so glad we chose it. I love it and think it fits him well.
Our second pregnancy we found out we were having a girl. When I told Trent how much I liked the name Delia and thought it would be perfect, he immediatley nixed it. Crap. Time to start the list. I thought a family name would be nice, but not necessary. My main criteria was that I liked the name, it wasn't made up, it wasn't spelled weird ( sorry, but I just hate names that people spell differently than they are meant to be spelled, plus people never get it right their whole lives), and that it wasn't too common (I don't want my kid to be one of four Jenny's in her class or something like that). Once again 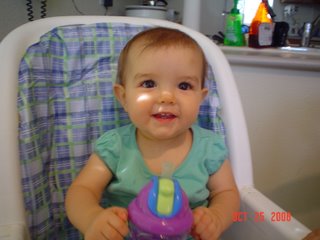 Trent crossed out most of the name on my list. Charlotte was always one of the top choices, we wanted to take 2 names to the hospital to choose from, Charlotte remained as the top choice as the other name changed from week to week. I decided since I have always liked my middle name and I wanted a short middle name for my baby that Charlotte Joy sounded pretty cute. We also thought Charlie/Charly was a cute nickname. So out she came and we were down to Charlotte or Paisley. Trent looked at me and I said, "Why don't you decide, I like both." Charlotte it is. We love it and everyone else seems to too, which is great, but not important.
We will probably have 2 more kids and who knows what they will turn out to be named. Right now I love the names Henry and Crosby for a boy. For girls I love Paisley, Amelia, Bridgette, and Daphne. I guess we''l just have to see.
I want to tag Abbie, Emily, Lindy, and Tori.
What did you name your kid(s) and why?
For Emily and Abbie- what names did you like and how did/is the deciding process going.

Tori :) said...
This comment has been removed by a blog administrator.
9:27 AM

I had to delete my other comment because I sounded illiterate. I did a post on this on my blog on May 22, 2006. I don't know how to include a link here, so I invite you to view my awesome post from May. ;)

my husband's sister's name is Charlotte Tucker H. so needless to say, I love both of your kids' names!
weird, no? she has a blog. you can link it through mine. :)

VERY CUTE photos! I have always loved both names!