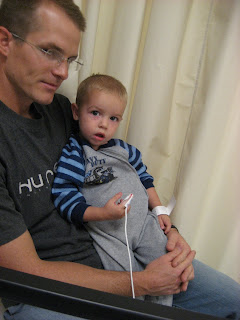 Out with the fluid and chronic ear infections. 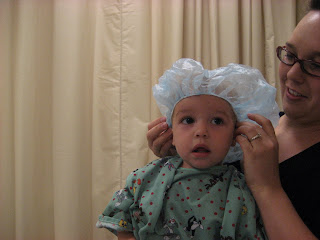 Henry came out of the procedure screaming mad. He was inconsolable for about half an hour. Quite a difference from Tucker's docile reaction after getting his tubes over 3 years ago.

Now that Henry has perked up and eaten he is back to his happy and silly self. I don't think he was in pain (they gave him a nice rectal tylenol for that- he was asleep, don't worry). I think he just didn't like the feeling of coming off the anesthetic.

I was a little frightened of getting the tubes for him, mostly because there is always a small amount of risk when general anesthesia is used. However, I also don't feel it is healthy to have him constantly taking antibiotics and being in continual pain. So it is done. And we are relieved.

It can be scary coming out of general, poor Henry. Yeah I was too lazy to spell the other word ;)