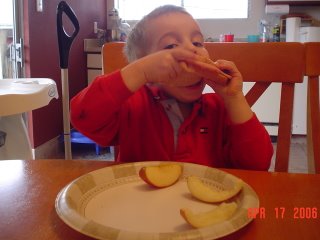 This is Tucker eating his lunch today. He calls his ham sandwich a beef sandwich and eats his apples like a watermelon or orange slice, he refuses to eat the peel. He loves cheese and would eat it all day if I let him. Some of his other favorites include chocolate milk(it's actually carnation instant breakfast), baby carrots, steak, eggo waffles, bagels, ham, lately he loves salad (weird kid), and McDonalds cheeseburgers(not so weird). He also loves anything chocolate, shocking. He is a total texture guy and will not eat "squishy" foods such as pudding (even chocolate), applesauce, mashed potatoes, etc..
I don't know what Trent's number 1 favorite food is, pretty sad considering how long we've been married. I do know he loves steak, PF Chang's, that orange jello salad with cottage cheese in it, anything sweet, he likes to eat tomato soup with grilled cheese (Tucker likes that too) and he's never once refused to eat something or told me anything was gross that I've made-thanks honey.
I happen to love food and could write pages about food that I love to eat. So instead I will just say some places that I love to eat. PF Chang's (Honey crispy shrimp, Chang's spicy chicken, lettuce wraps...), anything at Cheesecake Factory, Crackers, Ned's Krazy Sub, tons of different mexican spots. A couple of my new favorite snacks are edamame (soy beans) and Kozy Shack rice pudding. As for Charlotte, she has only one food of choice-Boo boo milk.
Posted by Robin at 11:13 AM

Food is so easy to write about. We are passionate about food and I have a hard time understanding people who are not.

I may have to do a post about food. It may last for days though...
Tucker eats so much better than Taj. Taj will eat cheese, "choc nilk", chicken, waffles, dry cereal and crackers. Unless he's totally hungry. He tends to eat dinner better than any other meal because he hardly eats all day. He doesn't get that from me.

Okay Robin. You win this time. I made deviled eggs. (They're delicious)