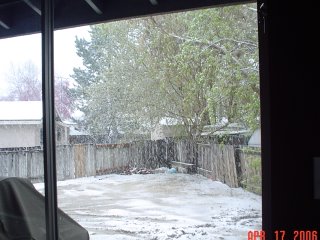 Yesterday it mostly rained and sort of sleeted all day, but around 5pm started snowing pretty good. This isn't a great picture, but I was holding a sleeping baby so I just took a shot out of our sliding glass window into the backyard. 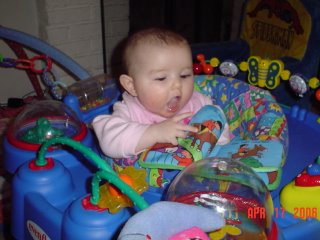 Charlotte is getting so big, she probably technically isn't old enough to play in this toy and the first couple times we put her in it she thought we were crazy. But now only a few days later she is loving it, grabbing and hitting the toys and cooing. It doesn't last too long but it is great while I run Tucker to the toilet or something. Also on Sunday Gina had their Jonny Jump-up out and we tried setting Charlotte in it, she can't bounce yet, but she didn't mind "hanging" out in there, so when we got home we pulled ours out.
Tucker usually refers to our baby as Baby Charlotte, but lately he's been calling her his sister which tickles me to death. "Is my sister asleep?", "Can I kiss my sister?" It's adorable. He loves trying to make her laugh.
Last night was sort of strange and long. Sometimes Tucker has bad dreams and comes in our room reassuring himself outloud, "There's no dinosaurs," or " there's no doggies,". Last night he came in crawled in bed by me and said "There's no bugs, there's no bugs on my guitar (referring to his Wiggles push button guitar), those bugs went to Kmart." It was pretty funny and cute. After a minute of snuggling I put him back in his bed and went back to bed. A few minutes later, this was a little after 4 am he came back in and asked to go to the toilet. He has never requested this in the night, but I asked Trent to take him in the toilet and when he was done he said "It's good morning." " No" we said and took him back to bed. He stayed in for a little bit, but around 5 came in and said "okay let's watch cartoons." What in the world! " No it's still dark we have to sleep some more." I told him. He stayed in bed with us for a minute than said "Come on dad fall of (follow) me to the couch," I told him to go ahead and lay on the couch and daddy would be out in a minute. He went our and we could hear him," Come on Daddy." Trent was too tired to move and it payed off cause Tucker fell back asleep waiting for him on the couch. We slept in until 8. It was great.
Posted by Robin at 8:08 AM

What was UP with the weather??? It's freakin' almost May!! Anyway- thanks for the phone call last nite. I KNEW you were a closet Ashley fan. ;)

What a funny boy. So glad you are writing this stuff down. I may not be his grandma, but I love to hear how he is progressing and getting smarter. He has never ceased to amaze me as he has grown. (I met you when he was 10 months old!)

The nightmare story made me laugh outloud, and calling her "sister" is SO cute. Aww!