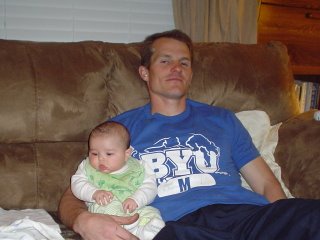 I may whine about my husband being really busy and not getting to spend time with him. Or I may say that he doesn't care sometimes, but my husband is superman! I love him more than anything and let me tell y'all (that's for you Tori) why, well some of the reasons anyway. The first thing you may notice is he is physically very beautiful, I think stunning. What a great bone structure, the cheeks, the jaw, NICE. Not to mention his body is flawless. This man is an amazing athlete and his body is beautifully toned- I hope noone is gagging right now. He keeps in shape right now by lifting weights 3 times a week, but previously he has trained as a pole-vaulter for years. He ranked nationally ever since high school- his best height being 18'1". He may correct me if I'm off by an inch or so. In high school he also competed in wrestling and did very well, but his love is the pole-vault.He also claims that he was the best at baseball and soccer when he was even younger, but couldn't do all sports so he picked pole-vault and wrestling. He is great on a snowboard or wakeboard and learns things very fast and isn't afraid to try anything-hence ripping his shoulder out of socket while attempting an air-railey on the wakeboard. He is also crazy on anything motorized, four wheelers, motorbikes, golf carts, you name it. He excels at pretty much anything he tries, and he knows it. If you want to humble him, take him on in basketball; it's not his strongest suit, although I'm sure he doesn't absolutely suck, that would be unheard of. He is a gifted mechanic, a handy man of any sort, and he doesn't do a half-ass job on anything. He is meticulous. He cleans twice as well as me, especially when it comes to the cars.
He is a college graduate, which he likes to remind me when I correct his grammar. He is a grill cooking, frisbee throwing, doughnut spinning, good tipping, discovery channel watching, gun owning, tractor driving, early morning kinda man.
He has an amazing testimony, loves his family,and adores his children. He is generous, forgiving, even-tempered, humorous, intelligent, and all man. Trent I love you!
Posted by Robin at 8:18 AM

I had a college degree when my husband was still in his 3rd semester of college. I used it against him any chance I could, but now I'm paying the price for it, as he is now in graduate school. Just remember to use the most powerful argument known to man, whether it is true or not: "I wrote a research paper on this in college". (seriously, what can you say to that).

p.s. I think your grammar is wonderful.

Somebody lucked out... but I think he lucked out even more when you said "yes" to his marriage proposal. You may not think so, but you are one sexy lady! (Right up there with Angelina Jolie in my book!)

What a mushy post!!:) I think y'all are both lucky to have each other.