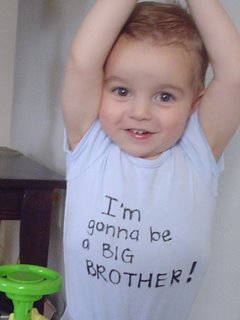 Monday Tucker had an accident free day. So Monday night we took him to Chuck E. Cheese as promised. He has only been there once before, the day that Charlotte was born. I haven't written down her birth story yet and I think it's time I did.
We were off birth control and my period was a couple days late, but I thought I would wait a couple more days before taking a pregnancy test. It was April 20 and my brother's wife Michelle called and said she thought she might need to take a pregnancy test. When I told her we were in the same boat, she decided to drive down from Salt Lake and we would do this together. We headed to KMart and bought a 3 pack and split up into our seperate bathrooms to do the tests. 3 minutes later we both had positive results!
Charlotte was due the day after Christmas. I remember sitting down with Trent and calculating her due date when we found out we were pregnant. The first thing Trent said was, "Our kid's gonna hate us." We hadn't really thought about how birthdays close to Christmas probably aren't the funnest. Anyway, since Tucker had come 3 days late with my mom feeding me castor oil mixed in orange juice (that's one way to assure there will be no b.m. during delivery) and my mom had all her babies late I figured this new baby would be a few days late too. Then there was the doctor and Trent saying- Let's have this baby before the end of the year, for tax purposes you know. So Michelle had her baby two weeks early and my friend Mel McKinnon that was due a couple days after me had her baby early as well, so by Christmas I was wanting to meet my baby. Christmas day came and went and early the next morning (around 4 am I think) I started having contractions. They weren't too strong, but were pretty regular and I told Trent I thought we were gonna have the baby that day. When he headed off to work they were still going and he told me to call when I was ready to go. Tucker and I had a pretty normal day, hanging out with the Blackhursts for a little while. While I was there my contractions were coming pretty close together, so I told my friend Michelle she may have to watch Tucker that night if I had the baby. She was really great and said they would be glad too. She had volunteered to previously because my mom's plans were to come up on January 2. I decided Tucker and I should go on a little date since we wouldn't be spending much time alone anymore. It was a strange thought because for the last two and a half years we had pretty much spent all our time together with just the two of us. We went to Fazoli's to have junch together. While we were waiting for our food I called my mom to let her know my contractions were about 6 minutes apart and I would be going to the hospital in the next couple of hours. She didn't sound too convinced that it was the real thing and told me they were just heading out the door to go to Rocky Point, Mexico for a few days. I told her to call me later that night to find out any news. After lunch we went home and took naps, well at least I tried to rest while Tucker napped. Around 4 I told Trent to get ready to come home cause I thought we should go to the hospital soon and I put my bag in the car and waited. When Trent got home my contractions had slowed down a little and I wasn't sure if we should go yet because I didn't want to get sent home. Matt and Michelle Blackhurst called to see if we needed them to come get Tucker yet and I just told them I would let them know. We decided to go and look around at Sam's club and eat some dinner. The walking got my contractions coming faster and they were hurting more now. The boys ate hot dogs and I had a cherry Icee and a couple bites of Tuckers dog. We drove from there to the hospital and got there about 5:30 or so. They checked me and said I was at a 4 and they would keep me for an hour and then check me again. I told Trent he should probably take Tucker somewhere and keep him occupied for an hour. This is when Tucker discovered the wonder that is Chuck E. Cheese. After an hour I had barely progressed at all and the nurse asked when my due date was. "Today" She said she hates to send mothers home on their due date so she wanted me to walk the halls for thirty minutes and see if that would move things along. I called Trent and updated him and began my walking. It sucked walking the halls wearing one robe on the front and one backwards to cover my butt, but it worked. I told Trent to come back to the hospital. The nurse said I was a 5+ and they could check me in now. They moved me to my room and hooked me up to moniters. I sort of wanted to give birth without an epidural this time. I had been reading a hypnobirthing book, but hadn't taken the classes that I wanted to besides a couple hour breathing and relaxation technique class we had gone to with Gina and Ian weeks before. I was feeling nauseaus with each contraction now and breathing through the contractions was getting harder.
To be continued very soon.
Posted by Robin at 8:16 AM

Don't leave us hanging, Robin! I need to hear the rest of the story!

I'm with Katie!!
Everyone is posting their birth stories. Maybe I'll post mine. (I have too many though!!)